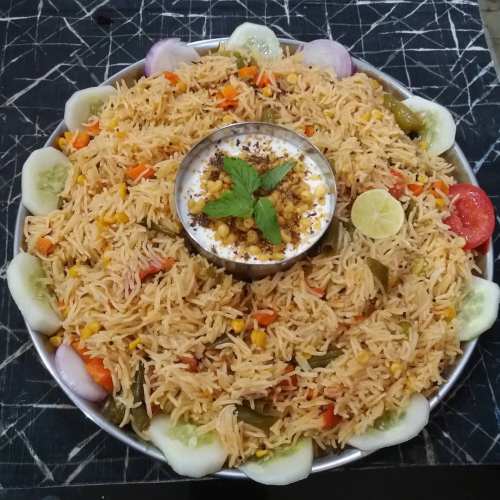 Delicious Pulao Recipe For You

This one is a rice dish you’ll never let go of. It’s easy, quick, and most importantly “delicious”. It is made with ingredients that are easy to find, so you can make it any time you like. These ingredients are amazing and bring out the exquisite flavors of this Pulao recipe.

That’s because we have talked about it before, but at that time we called it “pilaf”. Yes, you guessed it right, it was in our Chicken Bog Recipe. Like chicken bog, there are many variations of the pulao and this Tawa pulao recipe is one of them.

A Little more on the Pulao Recipe

Although we talked about pilaf (or pulao, whatever you want to call it), there are a few more things about this famous rice dish that you should know. Pulao, actually, refers to a collection of dishes.

These recipes usually have rice that is cooked in water, broth, or stock. Then some spices and additional ingredients are put in to make it more flavorful. Almost all of the pulao dishes follow this method, however, different ingredients may be added in different versions.

There is an interesting history behind this recipe and throughout the years it has changed and evolved into something better. However, that also means its names have changed as well. So before it gets confusing, allow me to explain what’s the deal with the many names of pulao.

This veg pulao recipe is just one of the many great dishes that go by the name of pulao. There is a long history of these dishes and their travel throughout the world. And as their journey progressed, their names changed to suit the region they reached.

You will find that all the names are somewhat similar in one way or another. That’s one way you can trace their origins. Although, the names like pulao or pilav seem to show Indian origins. That’s not the case, the oldest word for these dishes actually came from Persian languages.

After that, there is the “pilav” from Turkish. This word gave us the names we know, like “pilaf”. There are also the Hindi and Sanskrit words that gave rise to other names like “pulao or pulaav”.

You didn’t think that was it, did you? No, it’s far from it. There are many more names that can be discussed, but let’s leave them for some other time.

There’s more to It

THAT was just the history of the names but there’s a lot more history behind this amazing Tawa pulao recipe. Don’t worry, I’m just gonna talk about some interesting events. Not going to fill your tummy with history.

As you might have already figured out, the pulao recipe has been around for a long, LONG time. The earliest documented evidence of this recipe came from the tenth-century scholar, Avicenna. So, long story short, this dish is OLD.

One interesting event was in the 4th century BCE. It is said that Alexander and his armies were so impressed by the pulao recipe that they brought it back to their country when they returned. That’s how amazing this dish is.

Basmati rice is the most recommended for this veg pulao recipe. That’s is because they remain nice and separate after cooking. Make sure to rinse your rice well before using it to remove starch. Also do not add too much water while cooking the spices. Otherwise, the rice will turn out to be soggy and sticky.

After this recipe, you can also try another amazing rice dish, the biryani recipe. 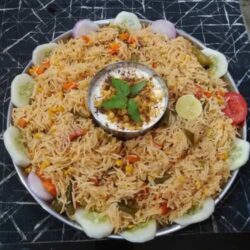