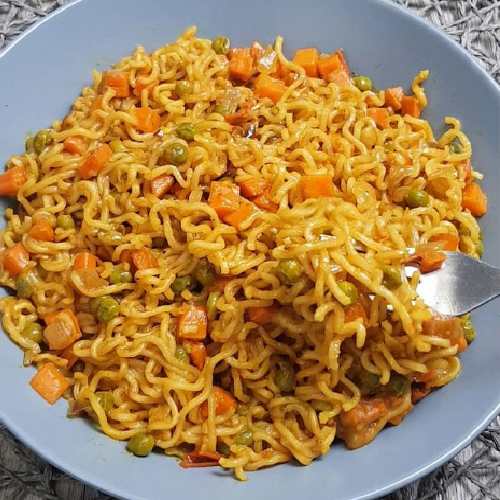 I’m sure you already know about instant noodles and most of you might already know the brand “Maggi” as well. Maggi recipe is an easy one and everyone can make it. I mean, you literally have to follow two or three steps on the back of the pack and voila, you have a delicious bowl of noodles.

Then why am I here? Well, I got bored of the regular Maggi recipe and wanted to make it interesting. So that’s what I did and found an interesting recipe to spark up the same old masala Maggi recipe.

Where It All Began

Sometimes it happens that I crave a spicy, wholesome dish but don’t have the energy to cook. At those times, I always love to have some instant noodles. They are easy, quick, and “oh so delicious”. I never compromise on quality, not even when buying noodles. Maggi noodles provide the best quality along with a phenomenal taste.

Many of us know Maggi as noodles and seasoning but there is more to it. Maggi is an international brand that has been around since the 19th century. It first came from Switzerland and provided sauces and soups. Later on, the brand grew and spread throughout the world.

These days Maggi instant noodles, along with other products, are famous in many countries like Australia, Malaysia, Singapore, New Zealand, India, Nepal, Bangladesh, and Pakistan.

That’s where the noodles come from, but this masala Maggi recipe has a different story. Unfortunately, not much is known about this recipe. Maybe, one day people just got bored of the same old noodles and tinkered a bit to make something better (that’s just my opinion).

The use of spices and vegetables hint at regions like India and Nepal but that’s all we have on its history.

How do I make Maggie noodles?

This masala Maggi recipe has some amazing ingredients and spices that bring out the best flavor of the noodles. But you know what ingredients go in the recipe. I am here to talk about what you don’t know; what are the noodles made of?

The Maggi brand is one of the best in terms of quality. They make their noodles with the best ingredients. The noodles are made from wheat flour, non-hydrogenated palm oil, vegetables, salt, spices, and some garnishing.
As you can see, there are great quality ingredients in the Maggi noodles and that really makes them the best choice for this recipe.

This Yummy Maggi recipe is amazing in many ways. It has an exceptional taste and is very easy to cook. But, obviously, that’s not all. This recipe is for everyone, how? That’ll be clear in just a moment.

I personally like chicken noodles; not saying that I hate veggies. I just prefer chicken a little more than vegetables, that’s all. But this recipe is all vegan.

So, for those who would like to have that special taste of chicken in their masala Maggi recipe, just add the Maggi chicken noodles instead of the regular Maggi noodles. They’ll add the great taste of chicken to your dish and make it even better.

I don’t know why, but I don’t like cheese in my noodles. But if you like it, you can add it. Just add some cheese on top of the dish at the end of the cheese Maggi recipe. Serve hot in a bowl and enjoy.