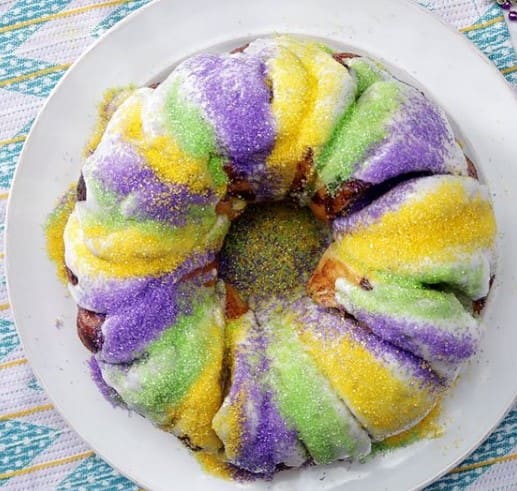 All Hail the King Cake! We have the King of cakes himself in our kingdom of
recipes today This king cake recipe is incredibly tasty; though not the fastest to cook. But that won’t matter, because the results of your hard work will be satisfactory and YUMMY. The king cake recipe is quite easy, but requires
patience and a lot of strength to hold yourself from “ravaging the cake”
before it’s done. Sounds funny right now, but wait till you try the recipe;
you’ll understand well enough.

This easy king cake recipe is a beautiful dish with a taste just as good as
its looks. As its name might suggest, it’s a “fancy” kinda cake. This is a recipe
for special occasions like weddings and birthdays. It could be an amazing
gift for loved ones and sometimes for yourself as well.

You can let your inner painter out on these cakes. Be creative with the colored sugars and make some designs on the top, or write a name (for birthdays), it’s all up to you.

For such occasions (when you are usually in a hurry), make the cake in
advance and freeze it. It can last about a week in the refrigerator. You should place your cake in an airtight container after it cools and then transfers it to the freezer. When you’re ready to eat it, let it thaw at room temperature and enjoy your king cake.

The king cake recipe has an “interesting” history and a deep meaning as
well. So, let’s begin at the beginning and see where this recipe came from.
Unfortunately, we don’t have any idea where the original king cake recipe
was made, but we do know where it “might” have come from (better than
nothing right…).

Traditionally, a toy baby is hidden in a king cake; the one who finds it gets a
reward. There was a tradition, very similar to this one, in ancient Rome.
During their festival of Saturnalia, ancient Romans hid a bean inside a
galette (a French term for a variety of flat, round, and crusty cakes), and
whoever found this bean will be the king of the day. So it can be assumed
that the king cake recipe evolved from this.

During the middle ages, this activity became associated with Epiphany. In
the Western Christian tradition, Epiphany is to celebrate the visit of the
Magi to Christ, that is where it gets its name from. As you see the traditional
king cake recipe is closely related to this festival. The small toy baby
is hidden in the cake actually represents Christ.

There are many variations of the king cake recipe in different regions and
all of them have a different and unique flavor. Different countries have
different ways of enjoying the King cakes as well, so there are many different traditions as well.

In France, the King Cake is a puffy pastry filled with almond-flavored
custard called “frangipane”. There are also countries where the cakes are
decorated with figs, cherries, and candied fruit (yeah, that reminds me of the fruitcake recipe too). So, try this King cake recipe, and most importantly,
have fun. 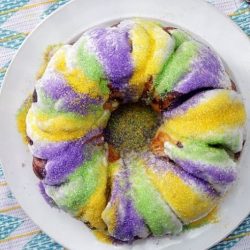 FOR GLAZE: Mix the confectioners’ sugar, lemon juice, and water (enough to make it asconsistent as desired). Spread over the cake and sprinkle the colored sugarsover it.